In 2011 an enabling master plan was approved for the development of the King EdwardVII estate near Midhurst in West Sussex. In 2018 NBA were appointed to master plan a retirement community composed on three separate plots within the original scheme

In 2011 an enabling master plan was approved for the development of the King EdwardVII estate near Midhurst in West Sussex. In 2018 NBA were appointed to master plan a retirement community composed on three separate plots within the original scheme.

Acting in a triangular configuration within the overall development the proposed scheme of 112 apartments and cottages were combined with the existing Chapel building to create a retirement village. The Grade II Listed Chapel, am early design by famed London Underground architect Richard Holden, acted as a central amenities building to the age restricted independent living units on Kings Green East and the Superintendents Drive Site.

Located within the overall 400 units on the site of the original King Edward VII tuberculoses Sanitorium constructed in 1934 the aged living scheme contributed to add an important mix to the provision of residential accommodation. It also helped to assure the restoration and long term use of what was the significant removal of the listed building from the ‘at risk’ register.

The scheme proposed by NBA within the South Downs national park (SDNP) was founded fundamentally on the analysis of the sites existing landscapes context.

Collaborating extensively with landscape consultants HusskisonBrown the scheme composed of a series of landscaped gardens surrounded by pavilion style buildings within a parkland setting. A tree canopy of indigenous species to the National Park integrates the gardens into the cleared tree plantation plots on the estate.

Existing pathways for both pedestrians and local wildlife were identified and extended across the schemes master plan.

Care was taken to retain the pitched roof characteristics of the surrounding buildings along with the core facade materials of brick and metal windows. The charismatic brickwork to the main Sanatorium Building was acknowledged and reinterpreted for the new apartment style buildings designed for the proposed aged living scheme.

Particular attention was given to ensure the provision of high quality retirement housing. A holistic design approach was taken with an emphasis on providing large age appropriate apartments with flexible space and daylight filled rooms orientated to maximise sunlight. Health living was seen as a primary design driver with Passivhaus insulation standards and renewable energy generation delivering healthy buildings as well as healthy living environments.

Each apartment had access to high quality amenity space at either ground, first or second floor level exceeding space standards. The efficiency of design being used to target the reduction in costs of domiciliary care.

By using passive solar gain via the layout and orientation of the building and the embodied carbon savings of a Cross Laminated Timber (CLT) construction the proposed design became genuinely environmentally responsible. This ensured that sustainability was part of the core identity of the development being targeted at environmentally conscious last time buyers looking to downsize from their previous family homes.

With the inclusion of the Grade II listed chapel building on site as a central amenities building with shop, age and pool the design ensured the reuse of an existing building and its embodied energy.

As a retirement village the NBA design at the KEVII delivers a sustainable solution ensuring residents would live life better for longer. 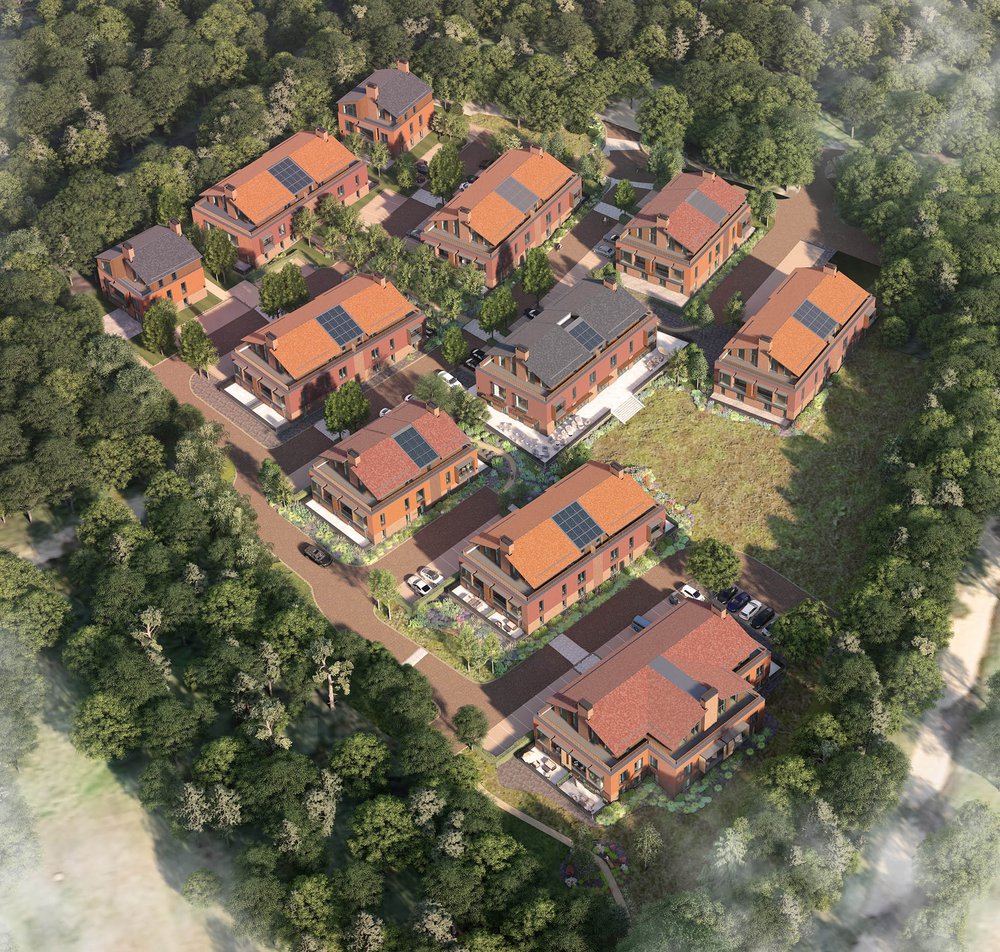 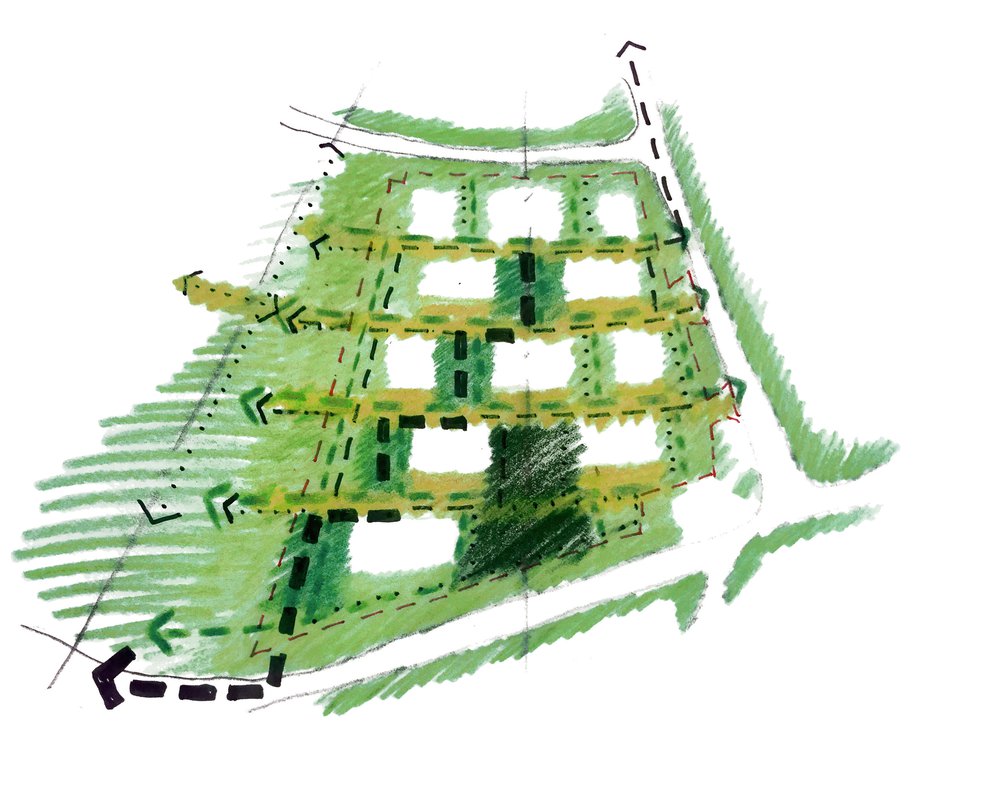 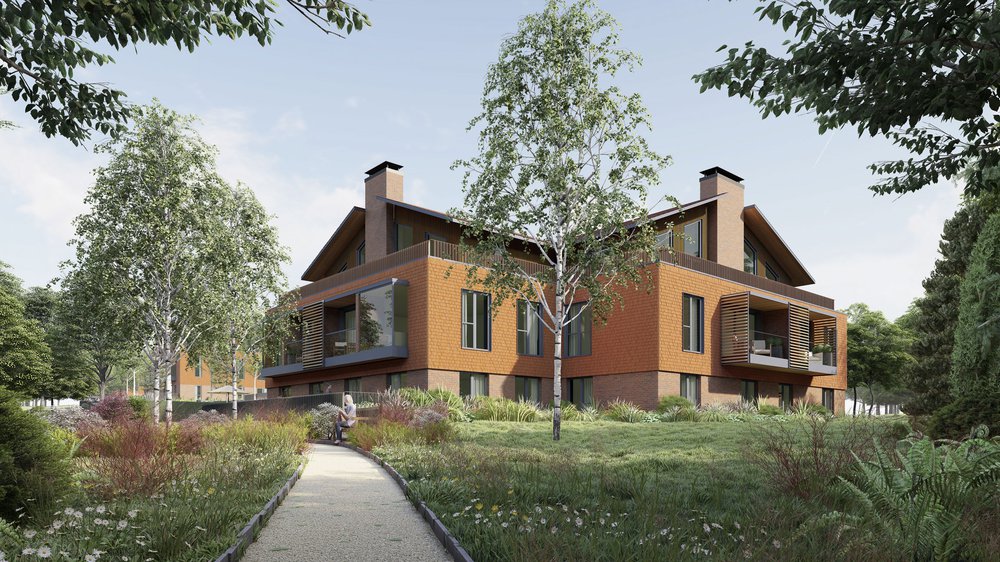 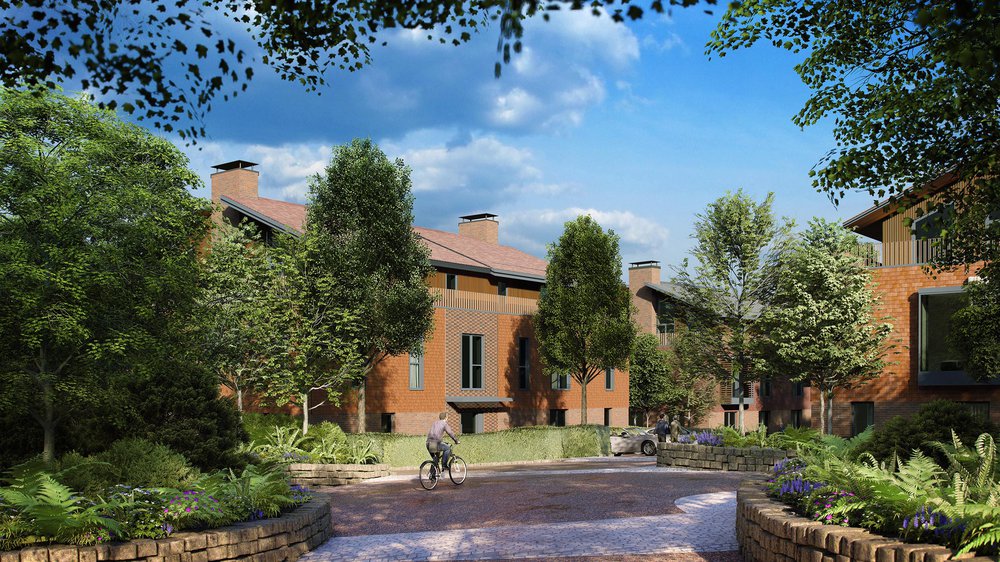 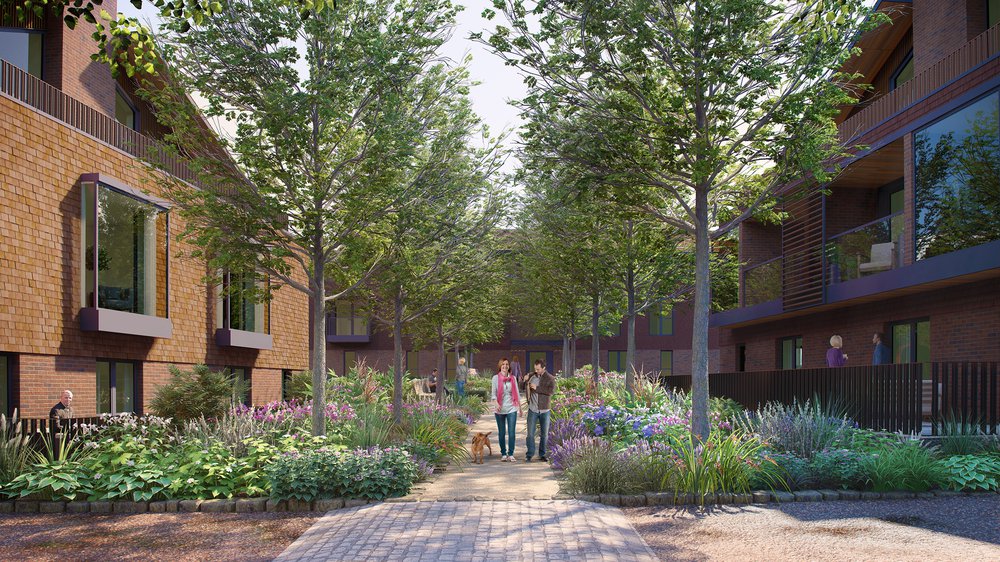 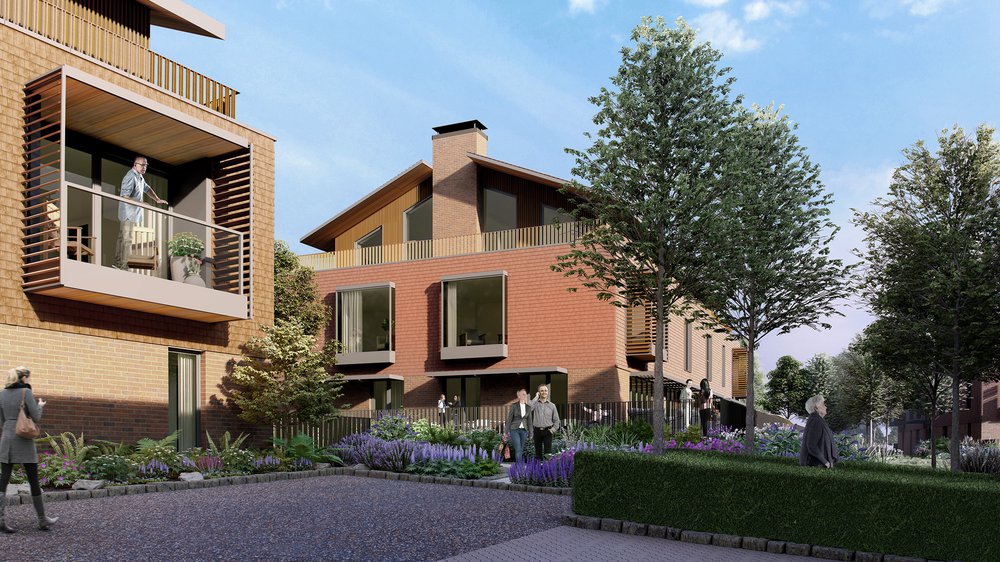 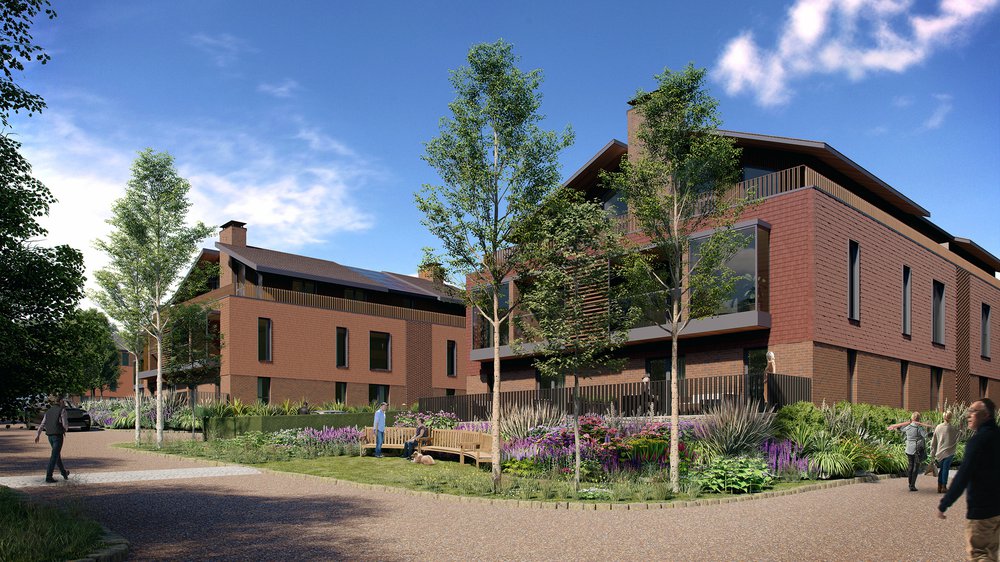 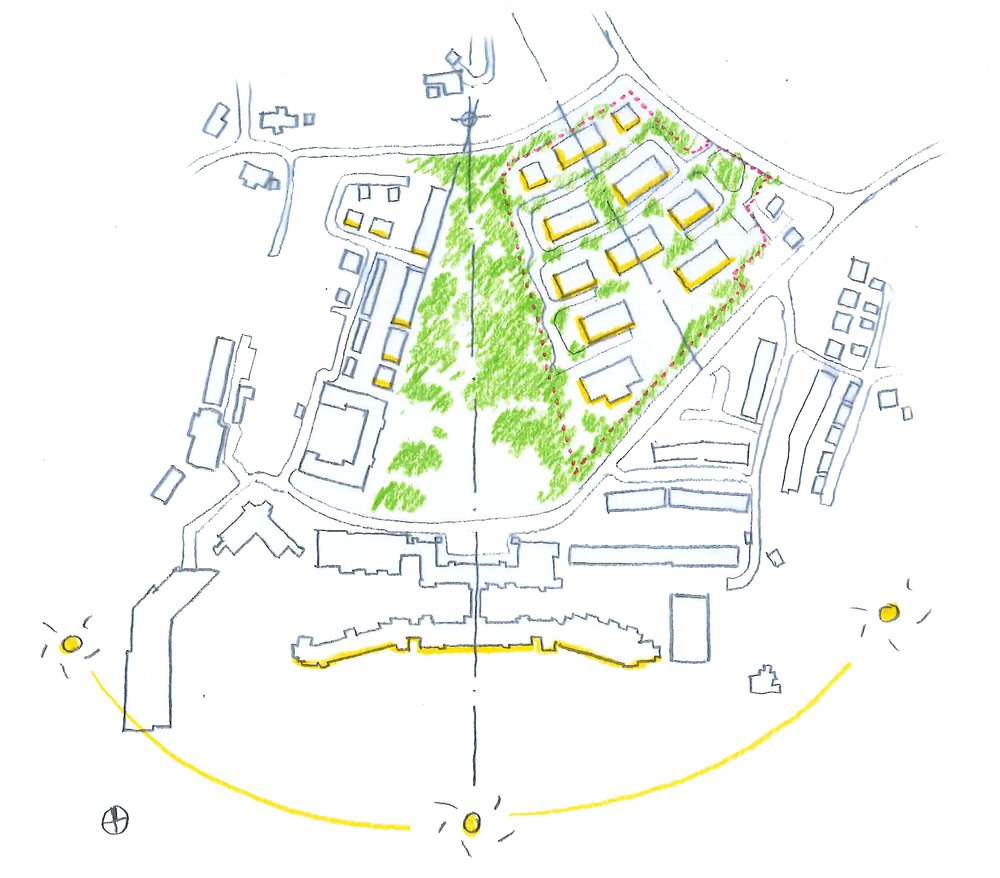 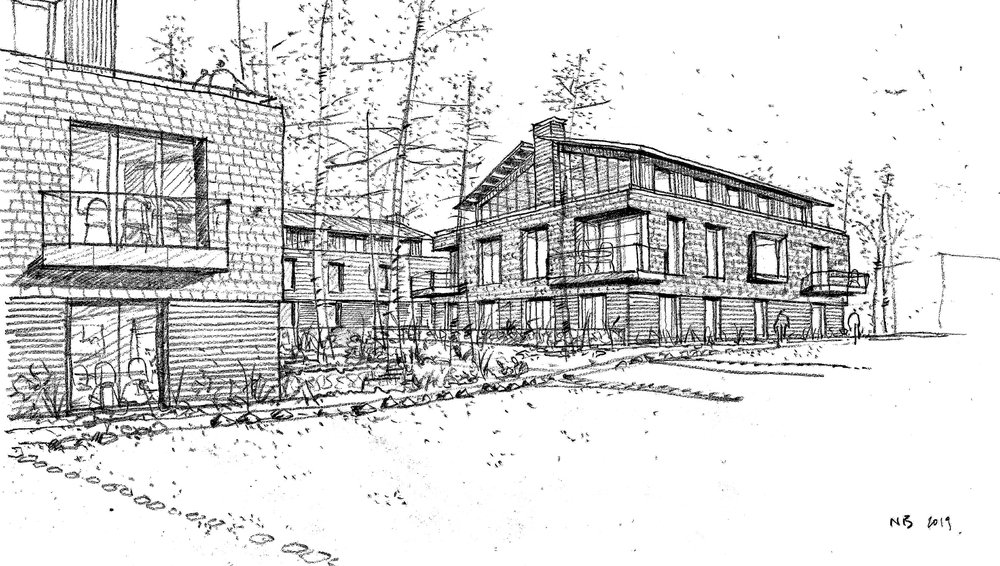