Situated between the large Victorian residences that comprise Rutland Gate in Knightsbridge, is the home of the Austrian Cultural Forum. The institution sponsored by the Austrian Government to promote all cultural things Austrian in the UK.

The existing building originally constructed in 1858 is a Grade II Listed terraced property arranged over 5 floors with basement in a conservation area. The main block rises over all levels with a two storey rear extension to Montpelier Place to the east. The rooms of the previous residence are arranged around a central Portland stone staircase with a connecting two storey Butler’s staircase located in the lower rear extension.

A full refurbishment of the building was carried out in the 1950’s by the Wiener Werkstaette, Austrian Designer Carl Auboeck on purchase of the property by the Cultural Forum. Since then a number of small renovations and heating installations had resulted in a deterioration of the buildings overall identity.

The proposed refurbishment was seen as an opportunity to match the functionality of the existing premises, much changed from its original residential use, with its current purpose as a forum for the promotion of contemporary arts and culture. Whilst retaining and renovating a selection of Auboeck’s furniture and the key neo-classical original features of the building the task was to present an updated image of Austria and its image abroad.

In the spirit of opening up the building to a new audience the key design principle of the refurbishment was to allow natural daylight into all levels of the existing building via two enlarged skylights. Simultaneously the existing assortment of carpets, suspended ceilings and ill placed service risers were stripped out taking the building back to its core structure and finishes.

Through a process of appraisal and selection, in conjunction with English Heritage, the key functions of the building were re-aligned with current usage patterns, including new LAN systems, new heating systems and a full rewiring of the building. Additionally existing original features of merit were retained, namely the Portland stone staircases and the mouldings to the Salon and entrance areas.

Nick Baker Architects have created a calm and illuminating backdrop for the forum’s activities. The existing basement has become a cavernous white zone for exhibitions and installations. The ground floor, with new Austrian oak parquet flooring and structural openings to the corridors and courtyard provides an open plan reception and library. The main staircase to the upper levels exposes its stone bones with swan necked handrails to the harsh context of the reconfigured skylight above.

By exposing the connection between the Butler’s stair and the main staircase natural daylight from the skylight above permeates to a number of levels of the building creating a valuable visible link in what is an essentially vertical building. Additionally the white staircase wall colouring serves as a backdrop to accentuate the warmth of the original Portland stone stairs whilst acting as a canvas for the diurnal artwork of the coloured manifestation on the skylight. Streaks of red light reach deep onto the salon landing across the stairs in the summer months to recede to the half landing in winter.

The Salon itself is restored to its original function and splendour as a place of entertainment and performance maintaining its chandeliers and cornices. The office levels above have had errant pipework and fitted furniture removed to provide for services integrated in new floorboxes and additional parquet.

Finally the principle of drawing daylight into the core of the building has been completed with a second skylight installed at roof level. Similar red manifestations cast alternative shadows through the staircase to the levels below.

In order to continue the theme of displaying both Austrian culture and Austrian design Auboeck’s furniture has been augmented by current furniture items throughout from, Wiesner Hager, Svoboda, Zumtobel and Weitzer Parkett. 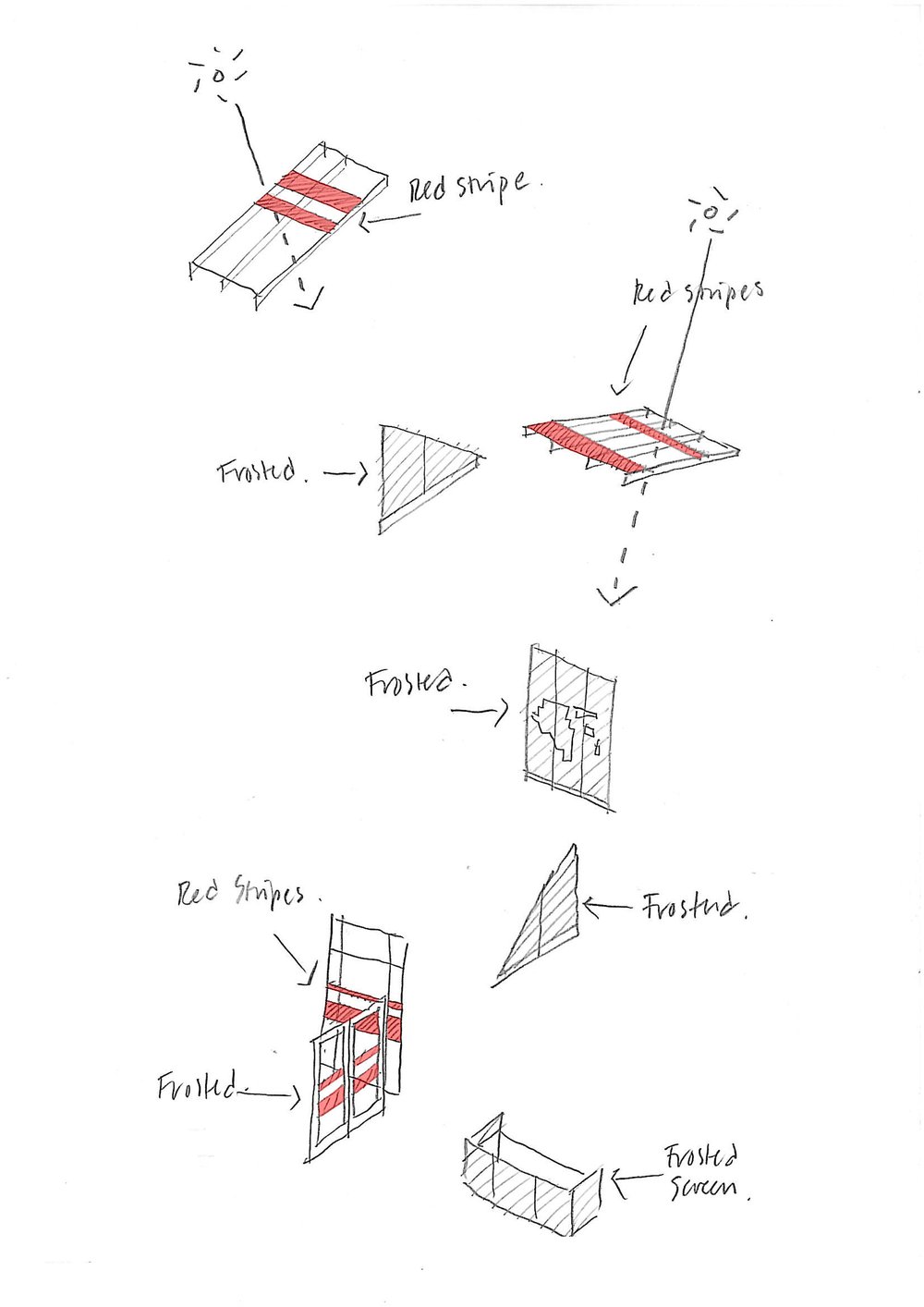 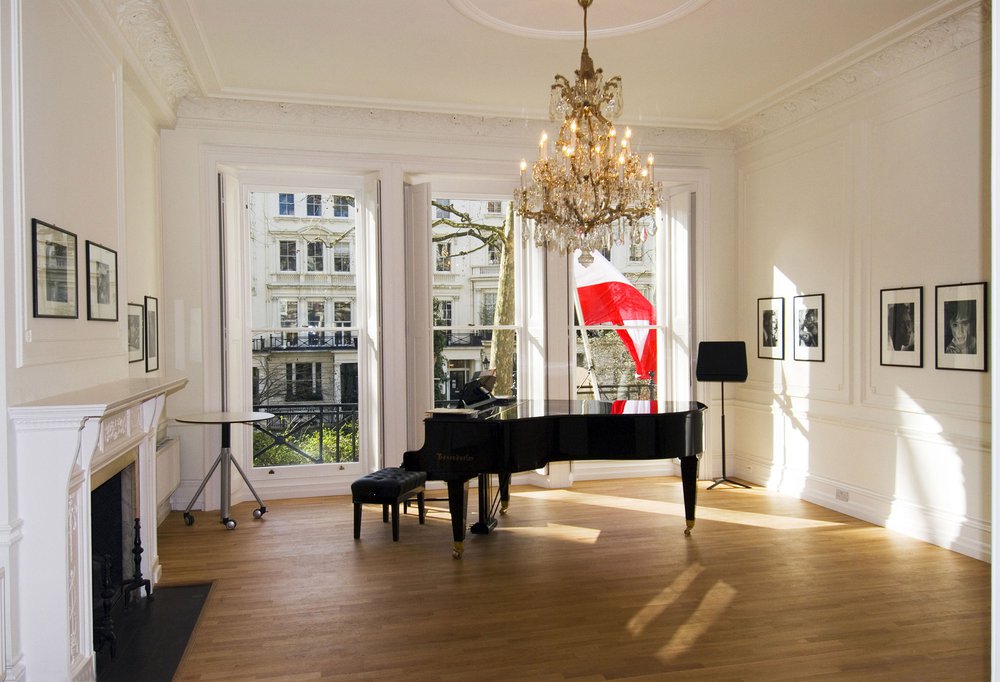 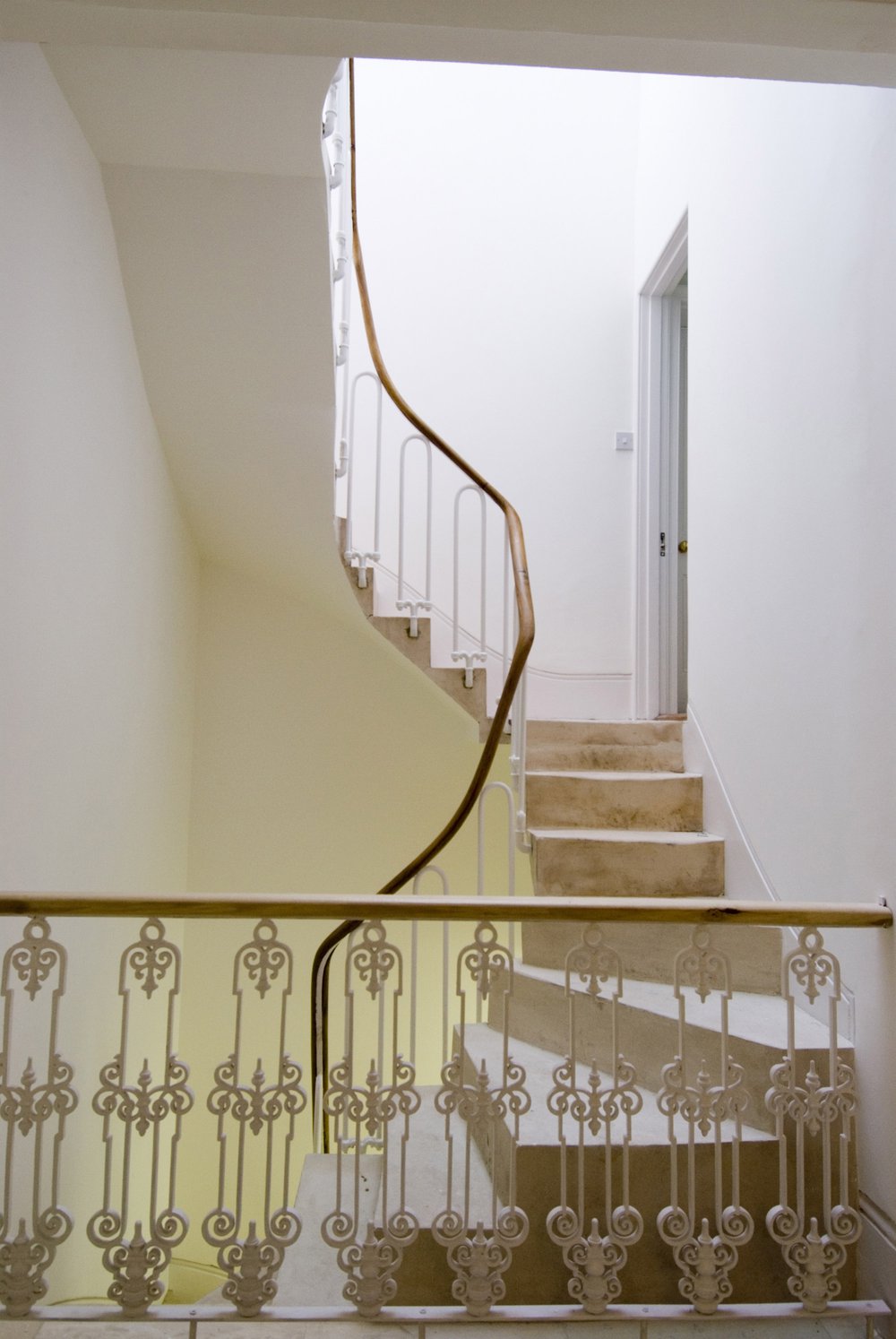 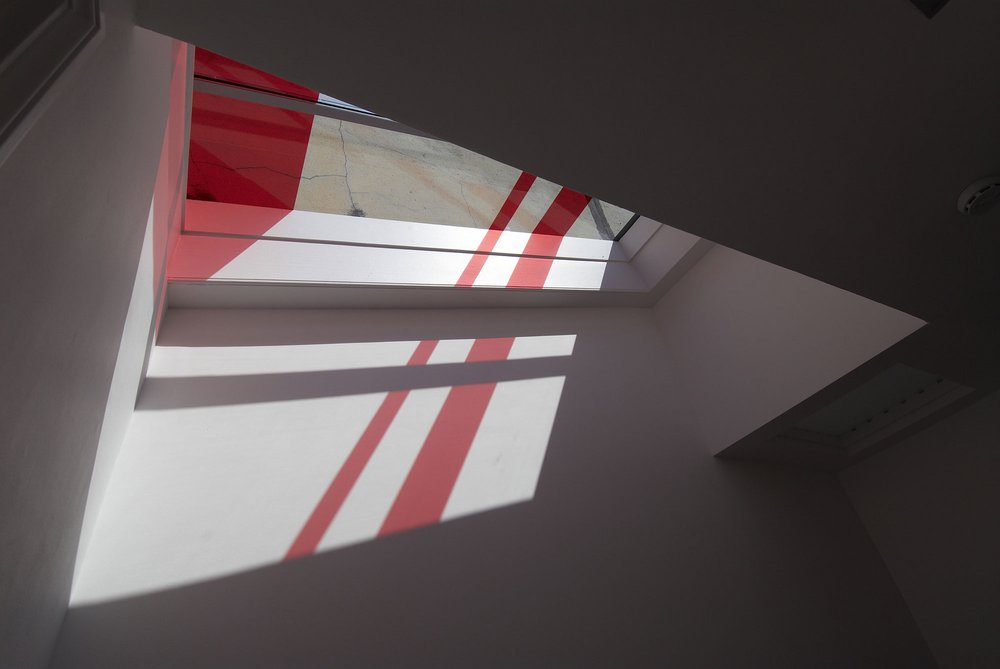 The manifestation to the new skylights create a da 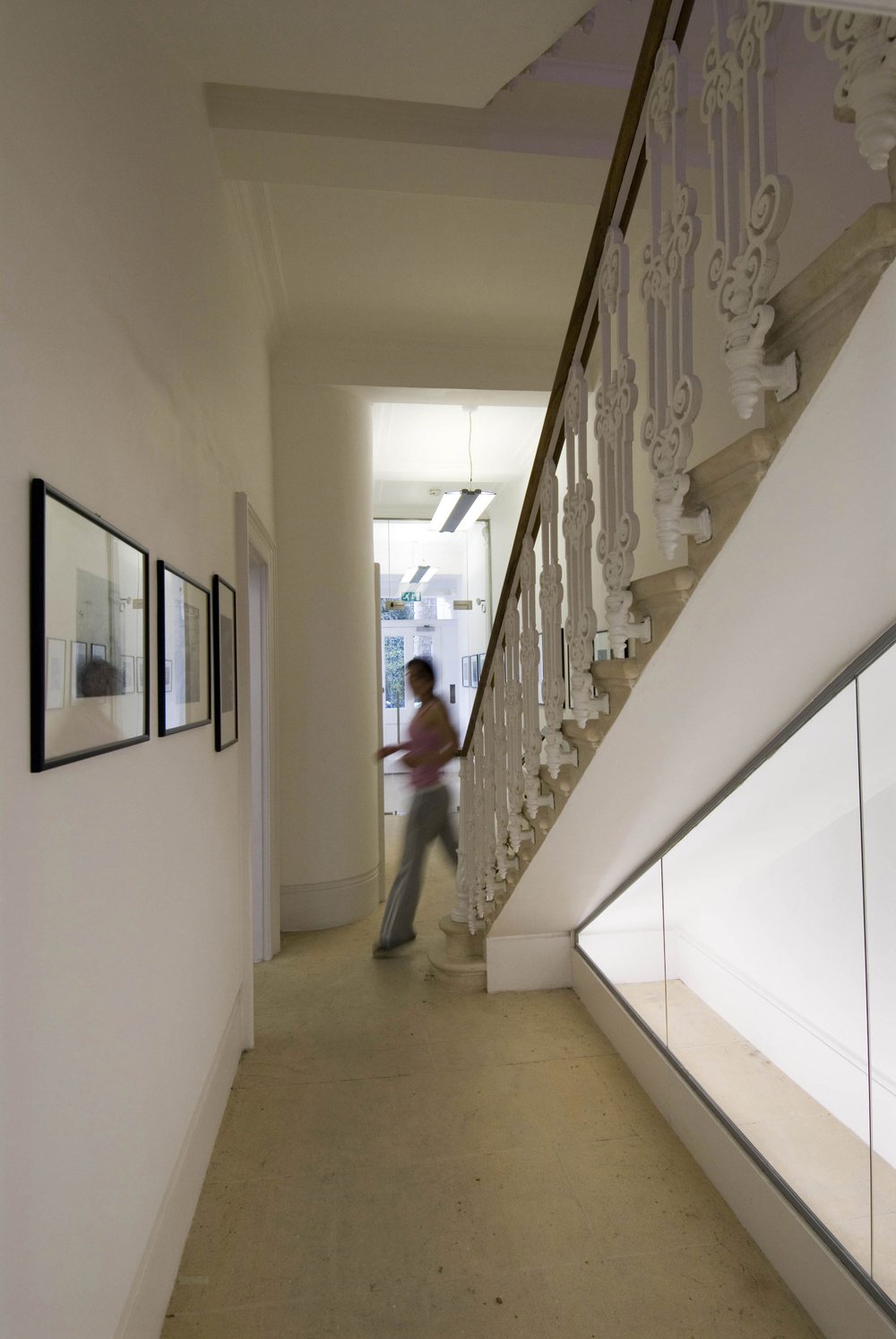 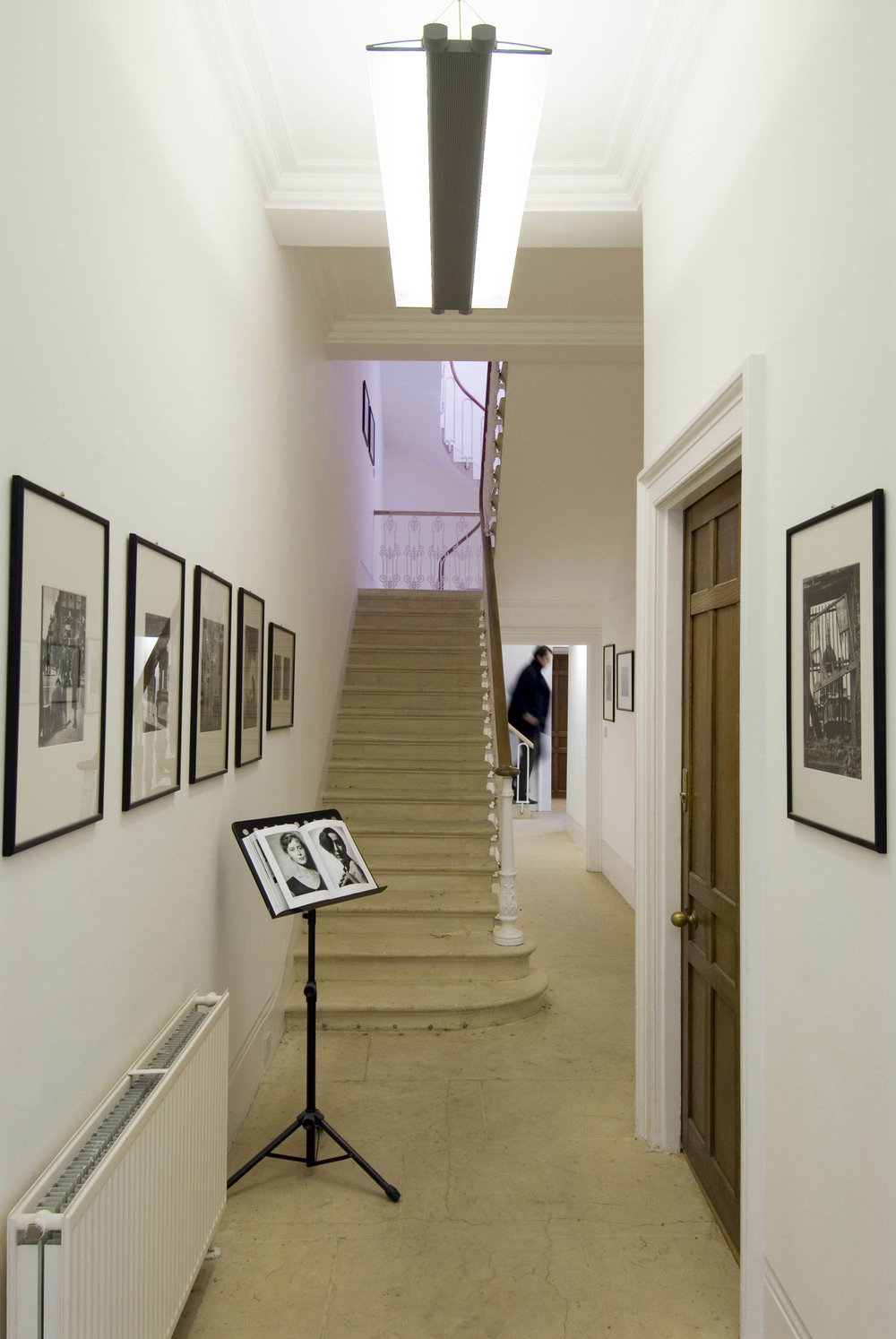